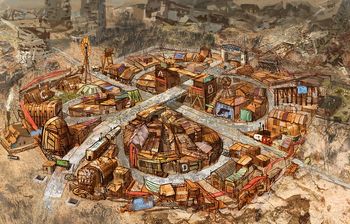 Those who don’t know the town сan imagine Fort as an unassailable fortress, but it’s a town built by prisoners of Crater, who was sent there to do time in harsh conditions. When other towns became overwhelmed with prisoners and it cost a lot to the authorities of these towns to keep them there, they were sent to the west of highway to secure it and caravans on the way between Adaran and Colossus. Fort became one of the biggest checkpoints built by prisoners. Military men of Adaran and Colossus, of course, control the order here, but it isn’t difficult to do in the face of common enemy- bandits. But the devil is in the details –prisoners say going to patrol. Some of prisoners joined bandits, but a fear to be eaten restrained most of them.

There is only desert everywhere, it’s very difficult to reach the nearest town alone, especially if we take into consideration status of this territory. Fort was built mainly of metal sheets taken from ruins and waste deposits. There are a lot of metal here and now a Fort looks as platelike tortoiseshell of tortoise band. Normally there are only military men and caravans, it’s a great fortune if a traveler appears there and soldiers listen for his stories with pleasure.

Why garrison won’t destroy bandits once for all? Inhabitants of nearest towns have already asked this question. One of local majors said that it’s easier to keep Fort and loose prisoners in fights than to keep them in special establishments. And black market has a good income from decommissioning and selling of weapon to such checkpoints.

On the suburbs of Fort there are skyscrapers covered up with sand, destroyed buildings and bridges which are perfect places for bandits who hide from sandstorm and hot sun. But for bandits there could be a profitable tourist zone.

Not far there is an old burnt-out wooden church built after people came to grass. There live fanatics who worship fire. Their motto “Flame will correct everything.” Nobody treat ill them because they are harmless. They bring to Fort trifles and exchange it with soldiers for food.